Your browser is out-of-date!

Update your browser to view this website correctly. Update my browser now

An American research study showed that in a 30 to 35 year old population, 20% of men and 5% of women will snore, and by the age of 60, 60% of men and 40% of women will snore habitually. Obstructive sleep apnea is a common sleep disorder and is estimated to have an incidence of 24% in men and 9% in women. Many authorities believe that up to 93% of females and 82% of males with moderate to severe OSA remain undiagnosed. Epidemiological studies have showed that for adults over 65 years old, up to 50% have some form of sleep disruption and poor sleep quality.

Sleep-disordered breathing (SDB) is a spectrum of diseases related to reduced airflow through the upper airway during sleep. This is due to complete or partial upper airway obstruction or increased upper airway resistance.

Snoring is frequently deemed as a social nuisance. Not a nuisance to the snorer, but a nuisance to the bed-partner. The presence of snoring is an 'alarm' that alerts one to the possibility of a sleep disorder. It is due to the vibration of the tissues in the mouth and oral cavity (namely the soft palate, uvula, base of tongue and other soft tissues).

Snoring implies an increased resistance to the inflow of air during breathing at the level of the upper airways.

Patients with adenotonsillar hypertrophy have a crowded upper airway with very little space for airflow, while obese patients frequently have a thick and fatty soft palate. It is the vibration of these soft tissues during sleep that results in snoring, when the bulk of this soft tissue exceeds a certain amount. Snoring is caused by a vibration of the structures of the oral cavity, oropharynx, soft palate, uvula, tonsils, base of tongue, epiglottis and pharyngeal walls. Occasionally, this leads to collapse, partial or complete, of these structures, which then leads to upper airway obstruction during sleep. Patients with a small jaw will also have less space available, therefore increasing the likelihood of airway compromise during sleep.

Nasal pathologies have been shown to aggravate and contribute to the severity of SDB, and treatment of the underlying nasal pathology may help, but usually not cure the disorder. There is a male predominance in OSA, this may be partly a result of hormonal differences since post-menopausal women tend to develop symptoms on average five years after menopause, with a prevalence of OSA approaching that of males. There are some reports that progesterone (female hormones) will reduce snoring and sleep apnea in males, while exogenous testosterone can increase upper airway resistance in females.

Commonest clinical symptom for patients with OSA is snoring. Most of my patients come to see me saying: "Hey doc, you know I snore; but you know what, it doesn't bother me, it bothers my wife!" This would be the social aspect behind the snoring.

Frequently, the sleep partner prompts the patient to see a physician because of concerns over repeated apneas (stoppages in breathing). Patients may complain of frequent awakenings with a choking and gasping sensation, nocturia (frequent passing urine at night), or nightmares. Many bed partners have witnessed their partners choking and holding their breaths during their sleep. Patients with severe OSA may be unable to sleep supine, as this causes the tongue to fall backwards resulting in obstruction of the airway. Common patient complaints include early morning tiredness and morning headaches (attributable to the repetitive nocturnal low oxygen levels). Morning dry mouth and throat are caused by mouth-breathing and snoring. Other symptoms include forgetfulness, depression, irritability and, less commonly, impotence.

The commonest symptoms related to obstructive sleep apnea are:

Am I Really Sleepy?

Sleepiness is a very common symptom that most of us will feel at some point in our lives. The commonest cause of sleepiness is not enough sleep! One should first be evaluating if one is getting sufficient rest. Sleepiness may also be due to poor quality sleep. Patients with sleep apnea may get enough quantity of sleep (7 to 8 hours per night), but poor quality sleep; hence, still feeling tired and sleepy the following day. Many of my patients with sleep apnea report, "Doc, I'm so sleepy that I fall asleep before my head touches the pillow." 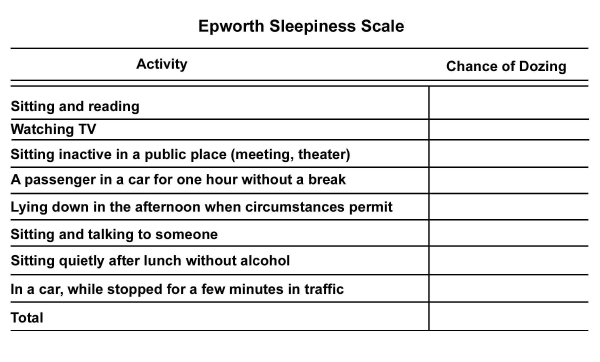 Each question is rated from a zero to a three.

A final score of zero (minimum) to 24 (maximum). In general, a score less than 10 is considered normal, any result between 11 to 14 is considered fairly sleepy, and any score above 14 is considered sleepy. A score of 20 to 24 is a dangerous patient who might fall asleep anytime, even when driving.

There are objective measures of how much one is sleepy. These tests actually evaluate how sleepy one is; one such test is called the Multiple Sleep Latency Test (MSLT). The subject is hooked up to a polygraph machine that measures muscle tone breathing patterns and brain waves. The subject is then placed in a dark, cool and quite environment and challenged to go to sleep as quickly as possible. Sleep latency is measured as the time taken for the subject to fall asleep. The test is repeated every 2 hours throughout the day. You are said to be fully alert if you are not asleep by 20 minutes. Patients will excessive sleepiness (e.g. from sleep apnea) might fall asleep within 3 minutes consistently. This Multiple Sleep Latency Test is a very accurate index of daytime sleepiness; it is far better than asking a patient if he is feeling sleepy or not. When you are pre-occupied with activity or work, you may think that you are alert even when you are actually quite sleep deprived. Activity masks sleepiness, but the tendency to sleep is there. If you were to stop work and do something monotonous, the insidious sleepiness could reveal itself instantly and without warning cause a sleep seizure.

Clinical evaluation is the most important step in managing a patient with snoring and/or sleep apnea. An ear, nose and throat endoscopic examination of the upper airway assessment is crucial. All patients should have weight and height recorded, body mass index (BMI) calculated, blood pressure taken, and neck circumference measured.

Patients with snoring/sleep apnea can be divided into 2 main groups:

The upper airway assessment is the most important step in the evaluation of the snoring patient. This would be fundamental, in assessing and deciding the modality of treatment in all snoring / sleep apnea patients.

Anatomy to be observed:

Based on the patient's BMI, neck circumference, oral cavity adequacy, tonsil size, palate size / length, tongue size, upper airway assessment, and the nasal passage size, the modality of treatment is decided together with the patient.

Treatment of snoring and sleep apnea may be conservative and/or surgical (see chapter on Treatment of Snoring/Sleep Apnea).

Do I Have Sleep Apnea?

Many studies have shown that the symptoms of a patient alone are fairly useful in predicting if one has sleep apnea or not. There are strong indicators of sleep apnea. Many of my younger patients (between 30 to 40 years old) come to my clinic with severe symptoms of sleep apnea, and who are already on anti-hypertensive (high blood pressure) medication. It is not normal for a young male to have high blood pressure; an underlying cause should be sought for.

Some simple questions that you may ask yourself to see if you might have sleep apnea:

At night, while asleep:

If you answer "yes" to any 3 of these questions, there would be a strong probability that you might have sleep apnea.

How Does Sleep Apnea Kill?

Nightmare time comes in the wee hours of the morning for people with obstructive sleep apnea. But it's no dream: That's when they're at highest risk of sudden death. It has been said that "Sleep apnea is the phantom cause of heart disease and sudden death". It is well known that patients with sleep apnea have a 6 times higher risk of dying between midnight and 6am, compared to normal non-apneic patients. As these patients with snoring and sleep apnea have numerous dips in their oxygen levels while asleep, it would not be surprising that they suffer from significant stress on the heart and brain during these low oxygen events. This in turn leads to high blood pressure, lack of oxygen in the blood and hence, strokes, heart attacks and sudden death.

In general, people with sleep apnea syndrome have a higher risk of death than the normal population. The price they pay includes a potentially crippling deterioration in daily functioning, an increased risk of high blood pressure and stroke, depression, and death either in accidents or in their sleep. The family of the person with sleep apnea syndrome will also be affected, as the patient may experience irritability, mood changes, lowered sexual drive, and a reduction of intellectual ability. In addition there are major business, insurance, health, and social costs including the loss of productivity, the impact of accidents caused by a driver or worker falling asleep, and the wasted health care dollars spent on alleviating symptoms like heart disease without treating their possible underlying cause.